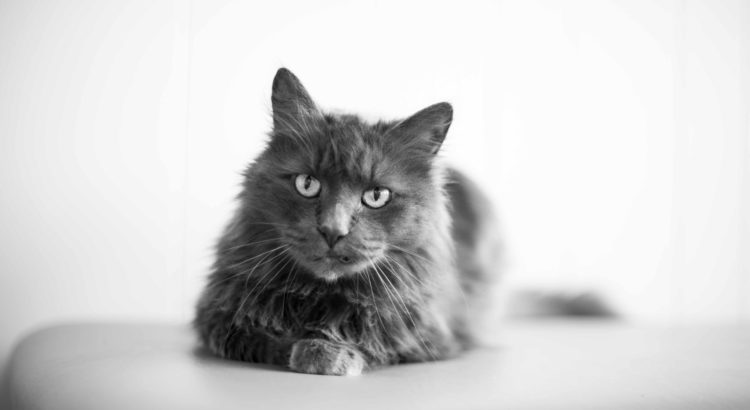 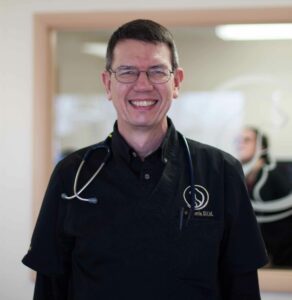 Dr. J. Kevin Morris, DVM graduated from the University of Missouri in 1989. He practiced in Henderson, Nevada before moving to Michigan in 1992. He now resides in Lapeer County but loves the Lake Orion community where he has worked since 1992. He loves nature photography, the outdoors, and sea kayaking in the Great Lakes whenever he gets the chance.  He and Melanie have been married for 34 years, and their 4 children are now adults. They have one dog, a few goats, a flock of chickens, and a duck named Elvis.

Dr. Kirsten Ura-Barton, DVM:  A native of Waterford MI, Dr. Ura-Barton graduated from Michigan State University’s College of Veterinary Medicine in 1997.  After practicing for 11 years in Connecticut and Massachusetts, she moved back to Michigan with her husband and their young daughter in 2008.  She worked as both a general practice and emergency veterinarian before purchasing The Animal Clinic At Oxford Mills in 2013.  In June of 2019, she unified her practice with LOVH and became part of our team as an associate veterinarian.  She has a special interest in behavioral medicine as well as a compassionate heart for her patients and their people.  She currently resides in Waterford with her husband Bill and their daughter Addison, as well as their two pugs, Luna and Bentley, and a pet bunny named Nibbles.  In her spare time, she enjoys traveling and spending quality time with her friends and family.

Michelle J. — Licensed Veterinary Technician (LVT); Patient Care Team Leader:  Michelle earned her certificate in veterinary technology from Michigan State University in 1987. Michelle has worked as a licensed veterinary technician for thirty  (plus) years. She lives in Dryden with her husband, three dogs ( Snoopy, and Emma), and two cats (Gene and Vinnie.) She oversees many vital hospital functions. She strives every day to treat patients how she would like her own pets treated. She attends continuing education classes regularly to stay current on new techniques and procedures. She has been a full-time team member since 2015 but has worked part-time at LOVH since 2006.

Terri — Licensed Veterinary Technician (LVT):  Terri has been a licensed veterinary technician (LVT) since 2001 when she earned her degree from Macomb Community College. She has worked in veterinary medicine since 1992.  She lives in Oxford with her husband, and their two dogs, Devyn and Charlie, and their cat, Phoebe. She loves traveling, horseback riding, and outdoor summer activities. Terri volunteers as a chairwoman for the Michigan Congenital Heart Walk and is an ambassador for the Adult Congenital Heart Association. She loves speaking at hospital heart events!

Camille — Certified Veterinary Assistant– Camille is our fun-loving encourager.  She is quick to suggest an “ice cream day”, and she especially loves cats.  She keeps her cat, Bubby, and Mr. Scoops, the LOVH ambassador kitty, outfitted with sharp-looking bow-ties!

Hanna — Certified Veterinary Assistant–  Hanna is a recent graduate of Lake Orion High School, where she was active in the theater department.  She became a CVA and plans to continue her education at Macomb Community College to become an LVT.  She loves all animals and is especially passionate about fostering TNR, and rodent care.  Her house is always full of animals including her past cat Trigger, her past rat Beryl, her current cat Suki, and her rabbits Saoirse and Theo.  She has creative ideas and brings lots of suggestions for streamlining processes here at LOVH.” 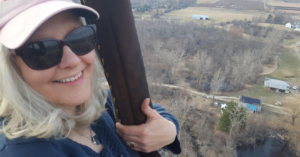 Melanie Morris — Hospital Manager, Veterinary Technician:  Melanie graduated from Northeast Missouri State University in 1984 as an Animal Health Technician, becoming a Licensed Veterinary Technician in Missouri in 1984, and in Nevada in 1989, before moving to Michigan in 1992. She married Dr. Morris in 1985, just before he entered veterinary school.  Their four children are living across the United States.  Her dog, Indy, has the very important job of keeping her busy, entertained, and active.  She loves her farm animals, knitting, hand spinning her own yarn, and machine embroidery.  She enjoys her farm animals, too.  She has a steer, a goat named Kawlijah, a duck named Elvis, and a flock of chickens.